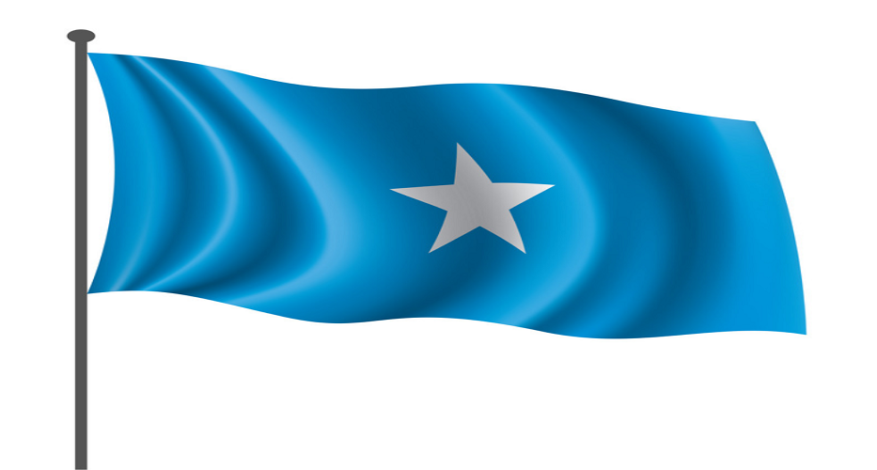 At the stroke of midnight and as the calendar turned to 1st of July 2020 biding bye to the month of June, there were ululations as the streets of Mogadishu, Somalia burst into a frenzy. It is the 60th anniversary of its independence.

The celebrations come in the backdrop of clan conflicts, Al Shabaab menace, civil wars not forgetting secessions for Africa’s most culturally-homogeneous country that gained independence on the 1st day of July 1960.

Somalia was colonized by European powers in the 19th century. Britain and Italy established the colonies of British Somaliland and Italian Somaliland in 1884 and 1889, respectively. These two Somali lands eventually united and gained 60 years ago, today.

Cream de la cream of today’s ceremony was at the heartbeat of Mogadishu where at 12:01 am, the soldiers lead a flag-raising ceremony amid cheers from thousands of locals mostly dressed in blue dresses and macawiis with a visible milk-white star – resembling Somalia’s flag.

It is a big day in Somalia.

The 60th anniversary has been a trending topic on almost all social media outlets with hundreds of contributors wishing nothing but the best to the war-torn county with some openly admiring the resilience of Somalia people, their tribulations notwithstanding.

Among those who poured out their messages was The United Nations Secretary-General’s Special Representative for Somalia, James Swan who in a tweet said;

‘As Somalia celebrates the 60th anniversary of its independence, the UN in Somalia salutes the courage, resilience and national pride of Somalis over the past six decades, and will remain at their side to provide support as their country progresses’.

It is both a nostalgic and celebratory mood as the Somali people who still hang on hope praying that one day, they will enjoy peace and stability in their motherland.

Apart from the negative stories both on an offline that are told about the country in the horn of Africa, there are more positive stories about her other than the negative ones that have been dominating both local and international headlines.

Healthcare in Somalia is largely in the private sector. It is regulated by the Ministry of Health of the Federal Government of Somalia.

According to the World Health Organization (WHO), lower respiratory infections are still the leading cause of deaths in Somalia, followed by diarrhea diseases, measles, malnutrition, tuberculosis, meningitis, and maternal conditions.

Under the stewardship of President Mohamed Abdullahi Farmajo, the Somalia government has also made good progress in matters of health by heavily investing in hospitals that include; maternity, theatres, clinics, etc. across the region.

According to the official twitter account of Dr. Fawziya Abikar who is the Minister of Health & Social Care- Federal Republic of Somalia, a lot has been achieved under the leadership of Farmajo who has served as the 9th and current President of Somalia since 16 February 2017.

“Great pleasure to see rehabilitated delivery rooms of Banadir Mother &Child hospital- Mogadishu. Monthly, an average of 400 to 500 women delivers there with zero cost. Duty to provide basic rights of women.” She said in a tweet an hour before the stroke of midnight.

A decade ago, who would have thought a football tournament would be hosted in Somalia? Worst still Mogadishu? Many would have dismissed it as a bad distant dream.

But today, the Somalia government celebrated the reopening of Mogadishu Soccer Stadium with the first kick-off match in 16 years. The reopening ceremony was led by President Farmajo who said;

“When I Last visited our ruined historic Stadium Mogadishu; the words ‘Dal waliba dadkiisa dhisaa’ written, instilled hopes and belief in our Somali spirit to revive it. We are all very proud to see Mogadishu Stadium restored by the sweat and sacrifice of our people and partners”.

The situation has been replicated in other provinces that include but not limited to; Hargeisa, Banaadir, Bosaso lower and middle Shebelle, and Gedo.

Social media pages are also awash with well-captured images of youths playing football at the beach while some result in swimming as they unwind.

It is believed that a nation that invests in its citizens’ education, will forever prosper. Maybe this is the reason for mushrooming of both primary, secondary, tertiary, and universities across Somalia.

“The commitment, zeal, and determination shown by the Somali Prime Minister is the foundation of successes and realization of impressive outcomes that we are witnessing despite the myriad of challenges facing the country”. Commented Alinur Salad who is the Director of Media and Information in the office of the Prime Minister during the inauguration of the newly rehabilitated Ministry of Commerce and Industry.

Backed by the AU and international donors, Somalia has gradually succeeded in building a working political system and government institutions, hosted around the fortified Green Zone area in Mogadishu’s international airport.

Attempts to bring peace to Somalia have seen several interim civilian regimes installed between 1991 and 2000. The Transitional Federal Government established in 2004 eventually managed to assume control of most of the nation’s southern conflict zones from the newly formed Islamic Courts Union.

The international community maintains a presence in the country through various non-governmental organizations supported by the UN, UKAID among others that have been helping nearly five million Somalis that rely on food aid to survive.

AMISOM too has also deployed its soldiers in a quest to quell the Al Shabab menace. The United States is one of the key security partners in Somalia, along with Turkey, and is now playing a crucial role in helping Somalia build a strong national army.

According to this year’s UN country report on Somalia, although the security situation remains volatile, the number of civilian casualties has generally decreased despite Al-Shabaab’s increased high-profile attacks.

However, diaspora communities have over the years remitted cash back home as they invest in rebuilding the shattered state.